Shenfield Place is one of the few remaining country houses designed and built by Robert Hooke. It is positioned close to the nearby 13th century Shenfield Parish Church of ‘St Mary the Virgin’ and alongside the old Roman road, which was the main coaching route between London and Colchester. Also, it is just a short distance from the ‘Green Dragon’ a 15th century coaching inn and 19 miles from London.
The house is now a Grade II Listed Building and known as ‘Old Shenfield Place’ and is run as a nursing and residential home for the elderly. Over the centuries the building has under gone substantial extensions, mainly to the rear, together with some internal modifications.

The house was designed by Robert Hooke for Lord Vaughan, 3rd Earl of Carbery, and built around 1689.
Lord John Vaughan (1639 – 1713) was President of The Royal Society from 1686 to 1689, so it is most likely that Robert and Lord Vaughan knew each other very well before Robert was given the commission to design and arrange the construction of the new house.
The house is shown as ‘Shenfield Place’ on Philip Morant’s map in ‘The History and Antiquities of the County of Essex: 1768’ and on Chapman and Andre's road map of 1777, but as ‘Mr Wheatley's house’ in J Cary’s 1790 publication ‘Survey of the High Roads from London’

EXTERIOR: 2 storeys, cellars and attics. C20 single-storey extensions to right and rear right. Ground floor, five C19 sashes of 4 lights with moulded plaster architraves. First floor, 5 similar sashes. Cellar, 3 casements with segmental arches. Attic, two C20 casements in gabled dormers with moulded pediments. The front elevation is stuccoed and ashlared, extending round the right return to the first stack, and round the left return on the first floor, where a single-storey extension, probably a conservatory, has been demolished. Band at first-floor level. Moulded and modillioned eaves cornice. Hipped roof. The right elevation has on the first floor 2 blocked apertures, and a similar band and eaves cornice. To the rear of the rear stack is an early C18 sash of 4+4 lights on each floor; 2 similar sashes round the corner in the rear elevation. The left elevation has on the ground floor three C19 sashes of 4-lights, and French windows; and on the first floor two C19 sashes of 6-lights and 2 blocked apertures. Two C20 casements in large gabled dormer with moulded pediment. Similar eaves cornice. C20 glazed door in hipped extension to right. Some Flemish bond in rear elevation and rear wing. 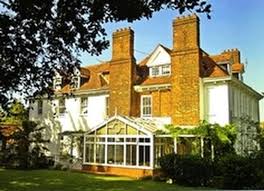 View from South West showing Rear Extension on the left

INTERIOR: all the ground floor interiors have original or early C18 moulded pine panelling, moulded cornices, and bolection-moulded fireplaces. Semi-elliptical arch between entrance-hall at right, and stair to rear centre. The early C18 stair is of 2 flights, with moulded closed strings, twist-turned balusters, and moulded pine handrail; 3 plain balusters at top. Some early C18 folding shutters and handmade glass in the early C18 sashes already noted. One first-floor room to rear left has panelling, cornices and fireplace similar to those on the ground floor, but is now divided by an inserted partition. The cellar has chamfered oak beams with lamb's tongue stops and 2 early doors with altered hinges.

My special interest in Shenfield Place:-
When looking through a list of buildings designed by Robert Hooke I was surprised to see ‘Shenfield Place’ in the listing and wondered where exactly it was situated since I had been born in Shenfield and had not been aware of the building’s existence. However, upon further investigation, I soon discovered that the building was only about 100 meters from the junior school that I had attended up to the age of 11 and less than 1 mile from where I was born. I must have walked past this building many hundreds of times on my way to and from school not knowing of its history.
Having discovered that the house was still standing and was being used as a residential care home for the elderly, I decided that I would very much like to see the building. I contacted the local care-home management and was able to arrange a visit to see the building but with very limiting restrictions connected with safeguarding. I could take photographs but must not have contact with any of the residents, which meant that I was free to photograph the outside of the building but could only take pictures in one room inside, the south-east facing lounge, whilst being escorted.
The most striking features of the house today are the four massive chimney stacks, two at each end, and the large sash windows in both ground and first floor rooms. I hope my photographs give a fair indication of the presence that this house must have presented when newly built.
My latest research has found that in Hooke’s diary, on 5th June 1689, Robert met with Lord Vaughan and agreed on a ‘40 foot square’ design for the house.
Please contact the Society via email if you have any further information on Shenfield Place.
RJD