Rita Greer is a historical artist. In the past Rita has been a goldsmith, graphic designer, food scientist and author/writer.

Based on published descriptions of him Rita has produced a series of paintings showing aspects of Robert Hooke’s life.

Since her scholarship to the Royal College of Art, London in the 1960’s, Rita has published two books on art/crafts and lettering, twenty three books on nutrition/health/special cookery for people with special needs and three books as co-author.

From the 1970’s Rita has been lecturing and broadcasting on both radio and television. She has held major mixed exhibitions of jewelry, goldsmithing and enamels in London and Oxford, and solo exhibitions on miniatures.

In addition, Rita invented the Trufree brand and formulas (for diet flour), which she sold to a multinational company.

On retirement in 2003 Rita began the Robert Hooke project, "to put him back into history" - give him images, raise his profile and obtain memorials for him in the City of London (St. Paul's Cathedral and Monument Square) and painted memorials elsewhere e.g. Gresham College, Open University, University of Oxford, Willen Church. 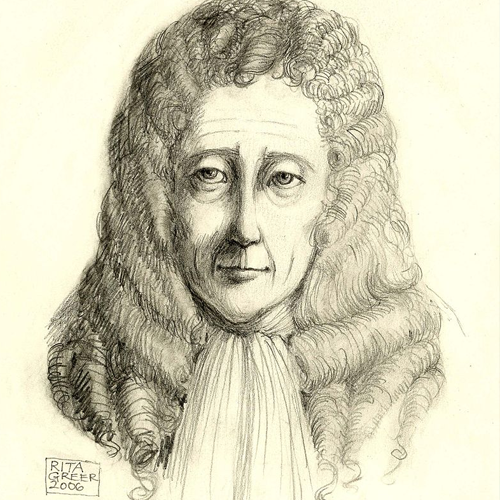