The door shown as an icon is The Gill Door at Radcliffe Science Library, Oxford and contains a depiction of six great Oxford Scientists.  Robert Hooke is in the lower left corner.

The Gill Door is a carved wooden door leading to Radcliffe Science Library at Oxford University.  It was carved by Eric Gill in 1935.

The left panel from the top to the bottom shows carvings of:-

The right panel from top to bottom has carvings of:- 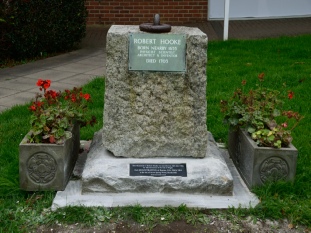 Prior to the creation of the “Robert Hooke Trail” this, and two road signs “Hooke Hill” were the only references to Robert Hooke on the Isle of Wight The plaque is located outside Rapanui at the bottom of Hooke Hill, Freshwater 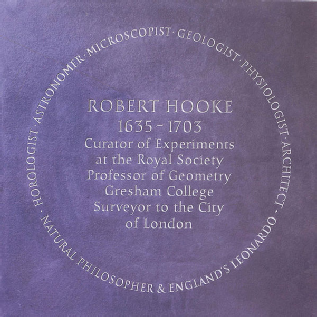 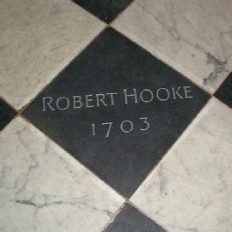 Eddie Smith, former Undermaster and archivist at Westminster School of which Hooke was a member, worked tirelessly on Hooke's behalf to get him a small memorial in Westminster Abbey. The work took years but eventually in 2005 one was unveiled. The inscription reads "Robert Hooke 1703" and is carved from one of the black marble tiles in the floor beneath the Lantern, near the pulpit. This is appropriate as Hooke was responsible for the laying of this floor.

Hooke's memorial at St. Paul's Cathedral is on the wall in the crypt of the cathedral, next to the tomb of Sir Christopher Wren. The quotation around the edge is from Micrographia, Hooke's amazing book, published in 1665. 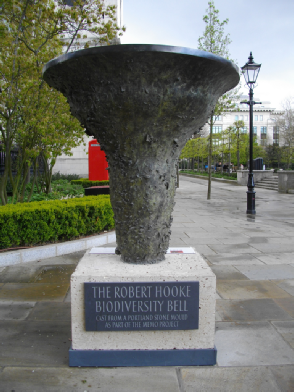 Designed by sculptor Marcus Vergette and cast at Taylor's Bell Founders in Loughborough from a mould of the same fossil-rich Portland limestone of which the base is made.  Robert Hooke first deduced that species could go extinct from giant ammonite fossils found in Portland stone. 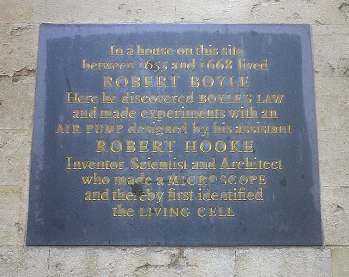 The Boyle-Hooke plaque on the outside of the Shelley Memorial in the High Street, Oxford.