Robert Hooke through Space & Time
From a young age Robert was curious about everything and his observations lead to very far
sited conclusions which were well ahead of the age he lived in. Although he did not realise it his
observations touched upon meteorology, evolution and tectonic plate movement.
As a child on the Isle of Wight Robert spent time with local craftsmen and visiting artists to learn
their skills. His practical talent became apparent when he built a wooden clock and a small boat
with guns that popped!
When he was 13 his father died, so Robert then moved to London where he had additional art
training. He attended Westminster School and went on to Oxford where he successfully assisted
Robert Boyle with his vacuum experiments.
Astronomy was one of Robert’s many interests. His practical craft skills enabled him in 1673 to be the first person to make a Gregorian telescope. This type of reflecting telescope was designed by the Scottish mathematician and astronomer James Gregory, who published a theoretical description of his design in 1663 but never built one.
Robert went on to make numerous astronomical discoveries which he recorded in his drawings.
Two of them were the shadows of two of Saturn’s moons on the inside of the rings. Another was
the great Red Spot on Jupiter. This is now known to be a massive storm twice the diameter of the Earth.
Robert also produced a surprisingly accurate drawing of the Hipparchus Crater on the Moon, shown here with a 2009 NASA Lunar Orbiter photograph taken three and a half centuries later. 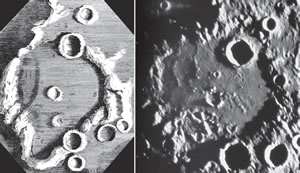 Robert experimented with dropping lead shot on wet pipe clay and noted that the nature of the depressions was similar to craters on the moon. We know now that they were caused by meteorite impacts. In addition to observing the planets he also wanted to know their size and the distance from the Earth, this also included the Sun. Robert, together with Christopher Wren and Edmund Halley discussed possible methods to measure the distance to the Sun during an eclipse. Halley had an observatory on an 800 metre mountain in Saint Helena, which at the time was the most southerly island in British Overseas Territories. It is south of the Equator and almost due South of Greenwich so of similar latitudes.

Halley was sponsored by the Admiralty to catalogue the stars in the southern skies for navigation purposes.
Hooke realised that his observations were being hampered by refraction, rarifaction, inflection
and parallax errors and he calculated ways of taking these into account when making his
measurements.
Robert also made measurements to calculate the density of air and how far up it went above the
Earth. His measurement proposals are illustrated in Figure 8 on Scheme 37 and described in
Observation 58 of Micrographia.
He was also very keen on calculating the height of the atmosphere, using Boyle’s law and other
methods. His data was not accurate and he thought the atmosphere might be hundreds of miles
high or infinite.
Today we know that is not correct but it does raise the question where does Space start?
The official answer on the definition of the height to reach space is laid down by the International Astronautical Federation (IAF). The region is named as the Kármán Line. It is an imaginary boundary 100 Kilometres (62 miles) above mean sea level. Once this 100 km line is crossed, the atmosphere becomes too thin to provide enough lift for conventional aircraft to maintain flight.
To put it another way, the cosmic boundary is where the laws of airspace suddenly give way to
the laws of orbital space.
The U.S. military and NASA define space differently. According to the US Military space starts 12
miles below the Kármán Line, at 80 Kilometres (50) miles above Earth's surface. Pilots, mission
specialists and civilians who cross this boundary are officially deemed astronauts.
Thanks to Robert’s practical application of his ideas many of them are still very relevant to twenty first century space exploration today.

Examples of this are:-
A. the coil spring and anchor escapement and balance in watches.
B. the properties of the Hooke/Universal Joint.
C. the functioning of springs.
A- During the Apollo 13 mission to the Moon, in Apr 1970, a fire occurred in the oxygen tanks
200,000 miles from Earth. The long series of subsequent events are well recorded on many media sources, but in brief the crew lost most of their oxygen, water, power and navigation systems.
However they were saved by clockwork !
Fortunately they still had radio communications with NASA Mission control in Houston who
calculated the exact time and duration the crew should fire their retro rockets for the return to
Earth. The time & duration of firing was critical:-as if it was too early, then the space craft would
descend too soon, and too fast, and burn-up on re-entry into the atmosphere. Firing the rockets too late would cause the space craft to skim across the Earth’s atmosphere and disappear for ever into outer Space. The ideal was to descend at an angle of two degrees.
Fortunately NASA had issued all astronauts with very accurate hand-wound wrist-watches.
These were especially selected to withstand extreme vibration, very large G-forces, intense solar
radiation and work without gravity. Omega won the supply contract with their very rugged and
accurate.
These used coil springs, balance - wheels and anchor escapements, all developed among the many other inventions of the versatile and practical genius Robert Hooke. At the precise time defined by NASA the Apollo 13 crew fired their rockets and made a successful descent in the correct ocean area where the recovery team were waiting. 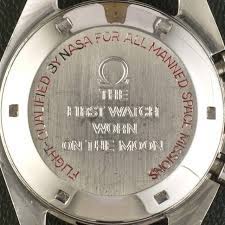 B- Robert Hooke is commonly thought of as the inventor of ‘Hooke's joint’ or the ‘universal joint’.
However, it is known that this flexible coupling (based on a four-armed cross pivoted between
semicircular yokes attached to two shafts) was in fact known long before Hooke's time but was
always assumed to give an output exactly matching that of the input shaft.
Hooke carefully measured the relative displacements of the two axes, and found that if one were
inclined to the other, uniform rotation of the input produced a varying rate of rotation of the
output. Hooke's studies of the universal joint caused it to be identified with his name, and it has
ultimately proved far more important as a rotary coupling than his original intention as a sundial
aid.
More complex versions subsequently designed by Hooke included provision for two basic
couplings to be linked by an intermediate shaft. With appropriate setting of phase and shaft
angles this ‘double Hooke's joint’ could annul the variable output velocity characteristic of the
single universal. It has proved invaluable for modern automotive transmissions and Space lifting
systems .
When NASA designed the Space shuttle it was soon obvious that there would have to be some
way to get the enormous equipment it was meant to carry out of its cargo bay and into space.
They needed a robotic arm that could remove cargo such as supplies for the International Space
Station (ISS), also the Hubble Telescope and Geostationary Satellites from it’s cargo bay. It also
needed to act as a work platform for astronauts and have a holding system to capture objects in
space. This requirement was met by Canada who produced a device called the Canadarm. This
was mounted in the side of the cargo bay and the arm has six joints – two in the shoulder, one at the elbow and three in the wrist.
It was used to remove the large Hubble Telescope from the load bay and place it in its allocated
orbital location and subsequently to re-visit for repairs, upgrades and servicing.
The grabbing mechanism is based on a simplified version of Robert Hooke’s mechanical design
for a camera Iris. It consists of a number of rotating metal plates which, like a closing iris, slide
across a protruding object on the target to grab it securely.
In 2001 the shuttle delivered a more complex, 7 jointed, robotic arm to the ISS. This was called
the Canadarm 2 and it plays a key role in space station assembly and maintenance. It moves
equipment and supplies around the station, provides a work platform for astronauts working in
space servicing instruments and other payloads attached to the ISS .
The ISS is as long as a football pitch and the Canadarm 2 robotic arm can travel the length of the
Space-Station to assist Astronauts carry out maintenance or install additional facilities.
The ISS takes about 90 minutes to circulate around the Earth, and it completes about 16
revolutions per day. It passes over the Isle of Wight frequently. Sighting opportunities range from none to several a week and can easily be seen with the naked eye as a fast moving star on
cloudless nights. Sighting forecasts are available on a number of Apps. for Tablets, such as the
free, ”ISS Spotter”.

C- Springs play a surprisingly important role in many Space operations.
They were originally used for ejecting satellites from the Space shuttle’s hold, but they are now
used for ejecting spacecraft leaving from any of the 6 docking ports around the ISS.
Despite this being an International Space Station the docking ports are not standardised,
although they operate in similar ways. Two are built to the Russian Soyuz spacecraft standard,
two to the NASA standard and two to the commercial standard of SpaceX and eventually Boeing.
Fortunately an adaptor plate is available!
The docking systems of the Spacecraft and the ISS have similar matching locking mechanisms.
When the spacecraft meets the ISS docking port the kinetic energy of the space craft causes the
springs on the ISS to compress when it docks.
Hinged clamps then latch on to the spacecraft’s docking ring.
When the Spacecraft departs from the ISS the hinged clamps pull back and release their hold on
the Docking ring.
The energy stored in the compressed springs under the docking rings then pushes the spacecraft away from the ISS. When the spacecraft has drifted about 2 miles away it can then fire it’s own rockets to return to Earth, without any burning or collision risk to the ISS.
A similar system is used on the large rectangular docking port used for the delivery and collection of food, water, clothing, experiments and waste to & from the ISS.
In addition when in transit much of the cargo travelling to Space has to be folded-up to conserve space in the load bays. Beside watches, springs play a very valuable part in helping the folded
antennas of satellites unfold when they reach their destinations and similarly all the mechanisms
on Interplanetary Rovers, such as the Curiosity & Perseverance, both currently exploring on Mars.

which provides the links to Earth for the International Space Station

In conclusion, we have much to be grateful to Robert for, including his mainly unrecognised
contribution to the Space Age we live in. Fortunately Robert has craters on Mars & the Moon
named after him.