Could this be the face of Robert Hooke? 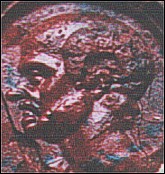 When Robert Hooke died, he was buried in St Helen’s Church, London.  Later, in the 19th century, his body was disinterred and put in a communal grave, and so is lost.  There is no known portrait of Robert Hooke.  There is an image which commonly appears, but it is in fact the Dutch scientist Jan Baptist van Helmont.

It may be that no painting of him was ever done.  Hooke records in his diary that he went with Robert Boyle to the portrait artist Mary Beale.  However, there was only one visit and Hooke, who kept meticulous records of his finances, made no mention of paying for a painting.

It is therefore interesting that there is a document in his birthplace on the Isle of Wight to which is attached a seal with a man’s head.  The document is a land transfer which also carries his signature.  It seems that this was his personal seal as it is not used on any other documents in the County Records Office.  While the image could be that of Hooke, the seal could just be one that he purchased and the picture could be one that appealed to him.