Early Life on the Isle of Wight 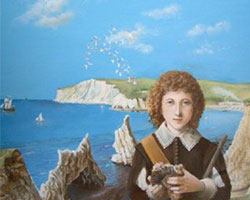 Robert Hooke was born on 18th July 1635 in Freshwater, Isle of Wight, the son of John Hooke, who was the permanent curate of the Parish Church of All Saints', Freshwater. The Church is one of the oldest established churches on the Island. John’s second wife and Hooke’s mother, Cecellie (nee Gyles), came from Brading. The family lived in a modestly furnished cottage with a parlour, hall, study, kitchen and buttery downstairs and three attic bedrooms above them. This cottage, which no longer exists, was on Hooke Hill, Freshwater. It was situated behind what is now Heatherstone House. Robert would have shared one of the bedrooms with his brother John, until the older boy became a grocer's apprentice in 1644. He had two older sisters, Anne and Katherine.

Robert Hooke was a sickly infant, who for seven years was not expected survive, but he gradually grew stronger, becoming agile and energetic, though not robust. He was a fast learner, so his father hoped that he might make a career in the church but Robert’s weak constitution and his father’s increasing ill-health ended this ambition, and the boy was left to his own devices. Robert followed his own inclinations, with the result that the Island formed him as a scientist. In Hooke's day, the West Wight was a separate island, the sea defences and the narrow neck of land bearing the road past Freshwater Bay is all that prevents it being so now. As a boy, Robert Hooke developed an aptitude for building mechanical devices by imitating local craftsmen. In his notebook he describes how"…he made a small ship about a Yard long, fitly shaping it, adding Rigging of Ropes, Pullies, Masts, &c. with a contrivance to make it fire off small Guns, as it was sailing cross a Haven of pretty breadth". The Haven was on the sluggish River Yar, at the Causeway.

In the 1640’s John Hoskins, a famous painter of miniatures, visited the Island. Hooke's friend, John Aubrey, recounts how, "Mr Hooke observed what he did...So he gets him chalke, and ruddle (red ochre), and coale, and grinds them, and puts them on a trencher, gott a pencil, and to worke he went, and made a picture: then he copied (as they hung up in the parlour) the pictures there." The skill he acquired with pen and pencil was invaluable later on when he needed to communicate his microscopical and mechanical discoveries, and in his career as an architect and surveyor.

In October 1648, when Hooke was thirteen, his father died of "a Cough, a Palsy, Jaundice and Dropsy". This was a time of unusual excitement on the Island due to the imprisonment of King Charles I in Carisbrooke Castle after his defeat in the Civil War the previous year. He was executed in London two months later on 1st December. By this time, Hooke, too, was in London. Being by the standards of the time old enough to make his own way, he had taken his inheritance, £40 from his father and £10 from his grandmother, and set off for the mainland. Initially, Hooke intended to take up an apprenticeship in Westminster with the great Dutch portraitist, Peter Lely, perhaps with introductions from a well-placed friend, but the position did not suit him, and he stayed only a few months.

Instead, Hooke moved to Westminster School, living from 1649 to 1653 with its severe headmaster Dr Richard Busby. The school specialized in producing clergymen and, to quote Stephen Inwood, Busby "left the mark of his rod on the backsides of at least sixteen future bishops".

Although Hooke was not often seen around the school, his fellow pupils included the future poet and playwright John Dryden and the philosopher John Locke. At the school Hooke mastered mathematics, Latin and Greek, as well as studying other languages and trying to invent ways of flying.

At Westminster, he began to develop a deformity, a curvature of the spine. This problem, which may have had its origins in genetic or nutritional factors, grew worse as he got older. In his middle and later years, he was described as having a thin and crooked body, an over-large head, sharp facial features and protruding eyes.

From Westminster School, Hooke went on to Christ Church, Oxford, where, as his money had run out, he had to pay his way by acting as a chorister and as a servitor to a richer student. This was not an unusual way for poorer scholars to make ends meet: Isaac Newton paid for his studies at Cambridge in the same way.