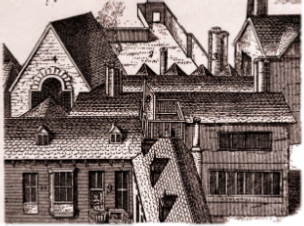 During the Cromwellian period Oxford became the centre for a group of able young men including Robert Moray, Robert Boyle, John Wilkins, John Wallis, John Evelyn, William Petty and Christopher Wren. Boyle refers to 'The Invisible College or The Philosophical College' in his letters written in 1646 and 1647. Upon the restoration of King Charles II they formed the nucleus of the present Royal Society which received its first Royal Charter on 15th July 1662. A second Charter was granted on 23rd April 1663, the King was named as Founder, and the name of the Society was changed to ‘The Royal Society of London for the Promoting of Natural Knowledge’ by its second meeting. In May 150 members had been elected.

Meetings were held at Gresham College, a foundation established by the Will of the Elizabethan financier Sir Thomas Gresham at his mansion between Broad Street and Bishopsgate, where seven professors were given lodgings and a salary in exchange for delivering free public lectures. Christopher Wren was Professor of Astronomy and Robert Hooke eventually became Professor of Geometry. The Lectures were often poorly attended by the public. Robert Hooke noted in his diary on 12 June 1673 ‘No auditory came morning or afternoon so I read not....’, in 1677 ‘no lecture but a rusty old fellow walked in the hall from 2 until almost 3‘ and in 1678 ‘Only one came, peeped into the hall but stayed not’. However, whilst at Oxford, Hooke established his reputation for being adept at the construction of mechanical devices and the ability to design and carry out convincing experiments. In 1662 he was appointed Curator of Experiments for the Royal Society, and Gresham College became a significant meeting place for scientific discussion and research. Gresham College became Hooke's home until his death in 1703. His task as curator was to supply each weekly meeting 'with three or four considerable experiments' in addition to carrying out specific enquiries as directed by individual members of the Society.

These demands were very difficult to achieve and it is most likely that the Royal Society would not have survived without the impetus of Hooke’s experiments, lectures and discussions. From 1662 Hooke was at his inspiring best by stimulating many gentlemen to pursue natural philosophy as a subject worthy of study for its own sake. Topics ranged from combustion and respiration to geology, taking in magnetism, astronomy, microscopes, optics, horology, the mechanical behaviour of materials and much more besides. Hooke died on 23rd March 1703 his funeral at St Helen’s Bishopsgate was attended by the whole membership in a mark of respect. 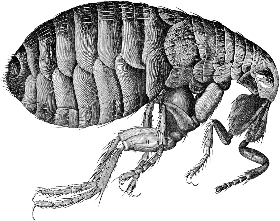 In 1661 Christopher Wren was asked to produce microscopical studies of insects for Charles II. This work was carried forward by Hooke and with the invention of the compound microscope reaching fruition with the publication of Micrographia in 1665. With his startling illustrations like those of the flea and louse, the book was an immediate, widespread and lasting success. In a long but most readable introduction Hooke praises the aims and personnel of the Royal Society and explains that with instrumental advances all the senses could be refined to advance scientific discovery. In such technical work Hooke had an outstanding talent.

In a discussion of the structure of cork Hooke introduces the term “cell” to science and in addition to natural history he also considers the following areas of study:-

A copy of Robert Hooke’s book Micrographia can be read at: